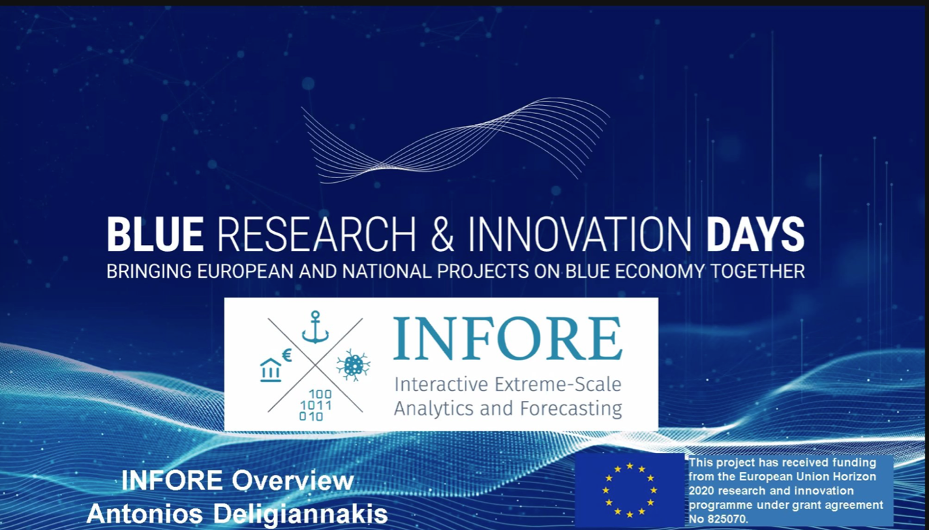 INFORE workshop at the Blue Week

The event gave the opportunity in every project related to the maritime domain to present its particular objectives, the current results, its cloud services, and the possible business cases, providing by this way the possibility to the participants to investigate common approaches to specific problems, complementarities, synergies perspectives, future collaborations. INFORE partners from Athena and MarineTraffic participated in the scientific an organization committees of the event.

In this context, we organised an INFORE workshop. First, an overview of the project was presented by the project coordinator, and then a presentation about the architecture of the INFORE platform was given by RapidMiner. Then, MarineTraffic presented the Maritime Use Case of INFORE, followed by a presentation by CMRE that focused on the robotics infrastructure of INFORE. Last, RapidMiner and MarineTraffic showed a live demonstration of the MSA workflow in RapidMiner UI and the visualization component of the MSA application respectively, displaying the results of the workflow (vessel tracking data, maritime simple and complex events, etc.) using an interactive map. 49 participants attended the workshop, and the presentations were followed by a very interesting and engaging Q&A session, where similarities between problems addressed in different projects were also discussed.

INFORE partners also had the chance to attend workshops organised by projects and presentations related to INFORE, participating in discussions and discovering common ground for synergies, future collaboration and exploitation of the results of INFORE. More specifically, the common ground for possible collaborations was identified between INFORE and the projects NEANIAS , RAMONES , i4Sea and VesselAI .

At the end of Blue Week, a hackathon was organised, which integrated challenges from the projects NEANIAS, i4Sea and INFORE towards providing the participants access to real world scenarios, business cases and open issues. INFORE collaborated with the project NEANIAS to organize one of the challenges of the hackathon with title “Submarine cable route design and path planning” providing also an AIS dataset that has already been publicly available on Zenodo .